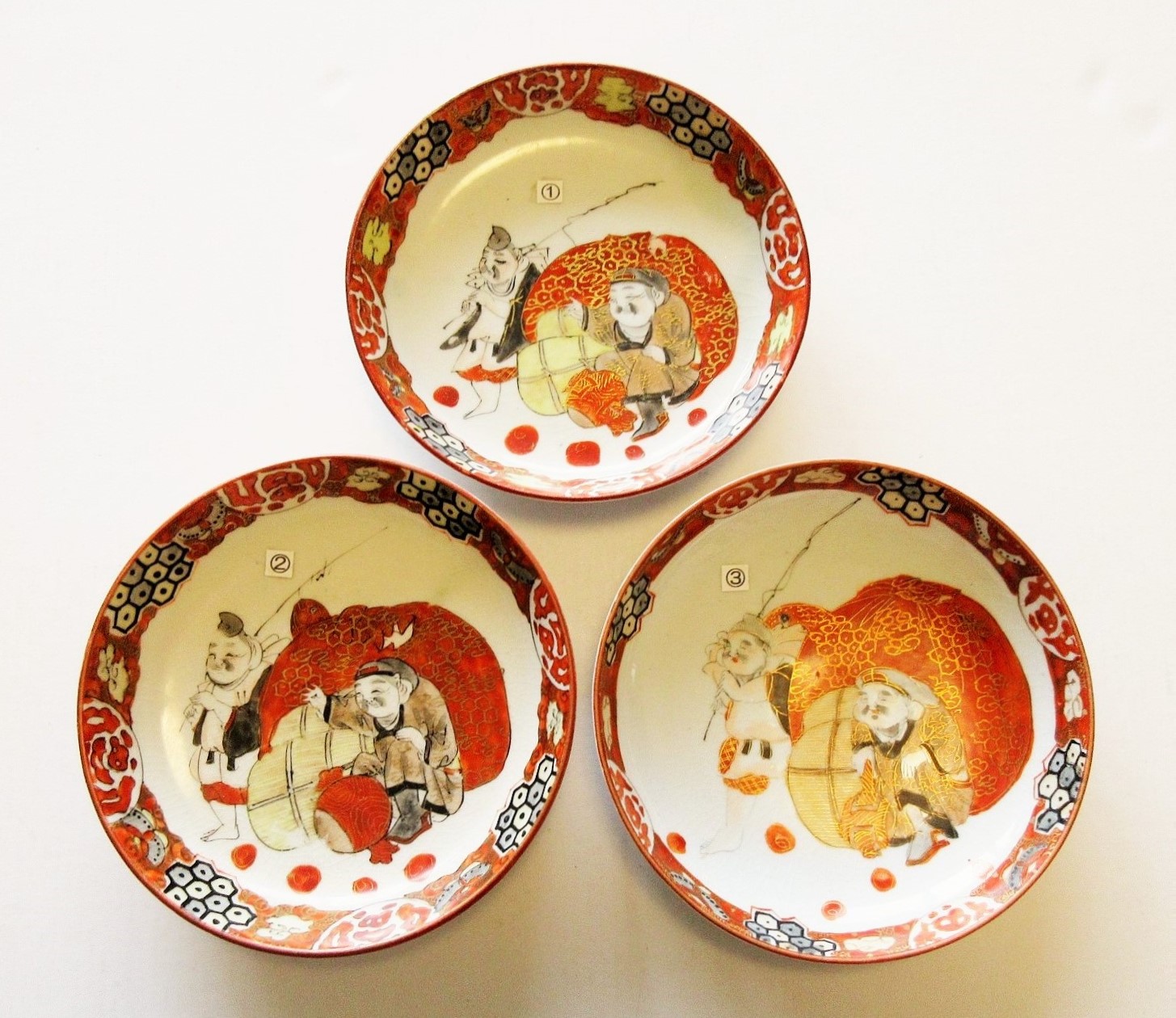 There are some differences between the three plates on which the designs of Daikoku god and Ebisu god (both are included in the Seven Lucky Gods) are drawn. Looking at Daikoku and Ebisu, the patterns, moldings, back names, etc., it is thought that each was one of the different sets.

Since Designs such as Daikoku or Ebisu were so common in Kutani that they were so common, It is believed that a master craftsman like Hashida Yosaburo changed the common design a little by incorporating his own knowledge about the design and pattern or the request from the pottery merchant. In addition, It is said that the shape or weight of the body might change if the production time changed. 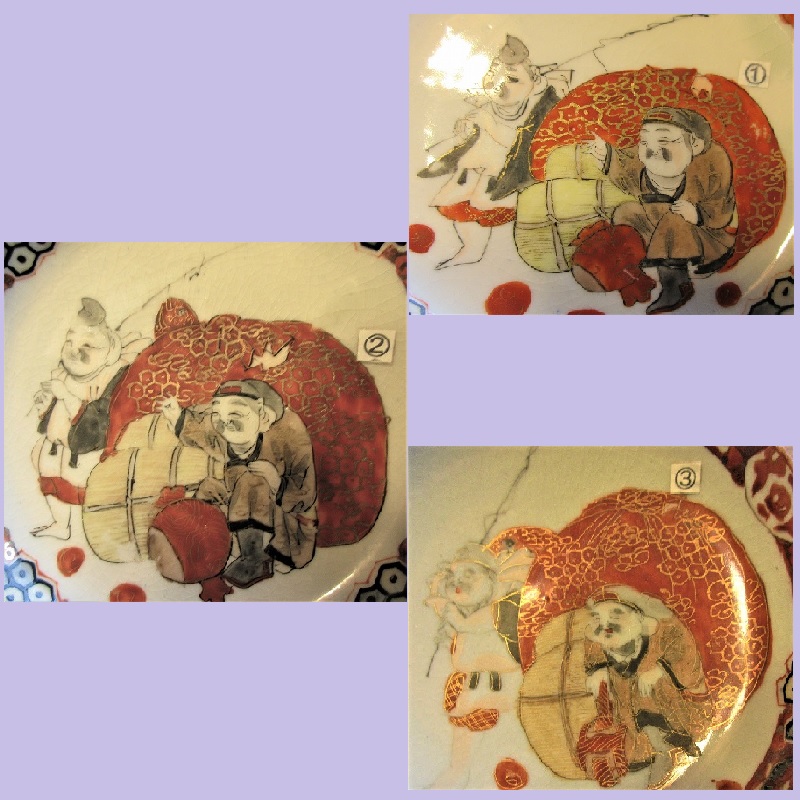 Generally, Daikoku is said to be the god of agriculture, and he has the image of carrying a large bag on his right shoulder and a gavel in his left hand on a rice bag. On the other hand, Ebisu’s image is that he has a fishing rod on his right shoulder and a sea bream in his left hand. However, all three small plates are a little different from that image. The differences are roughly as follows, including the following two images.

All three plates are common that Daikoku sits beside the rice bale and has nothing in his right hand. But two plates (plates ① and ②) raise their right hand, and the other (plate ③) puts his both hands on his knees. As for the fishing rod and sea bream that are typical of Ebisu, Ebisu in plate ① has not the sea bream.

On the plate ③ seems be drawn carefully as a whole, that is rice bale, large bag, and sea bream drawn in red are decorated with fine gold lines, and the facial expressions of Ebisu and Daikoku are gentle. 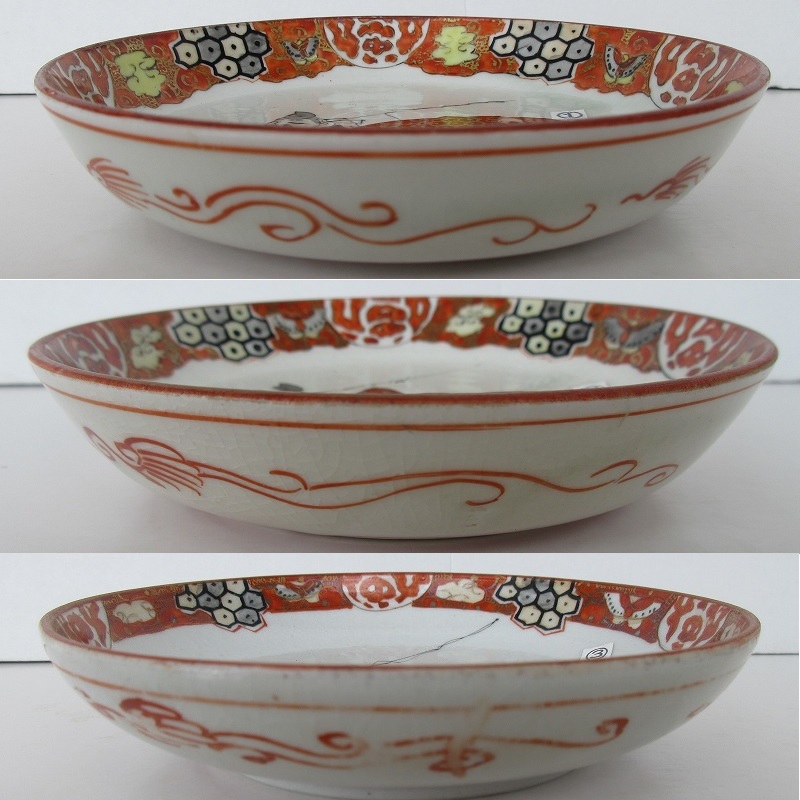 Tree plates are called as plate for namasu which is a dish of seafood or vegetables cut into small pieces and mixed with vinegar-based seasonings. The plates are warped toward the edge, but the plates ① and ② are a little steep, on the other hand, the plate ③ is a little loose. 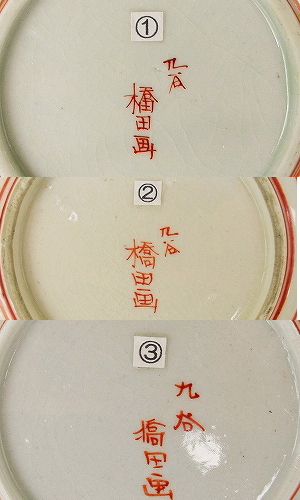 Their back names are written as “painted by Hashida”. However, plates ② and ③ are the correct character “橋 (hashi)”, but plate ① is incorrect. The reason is unknown.