explanation of this work 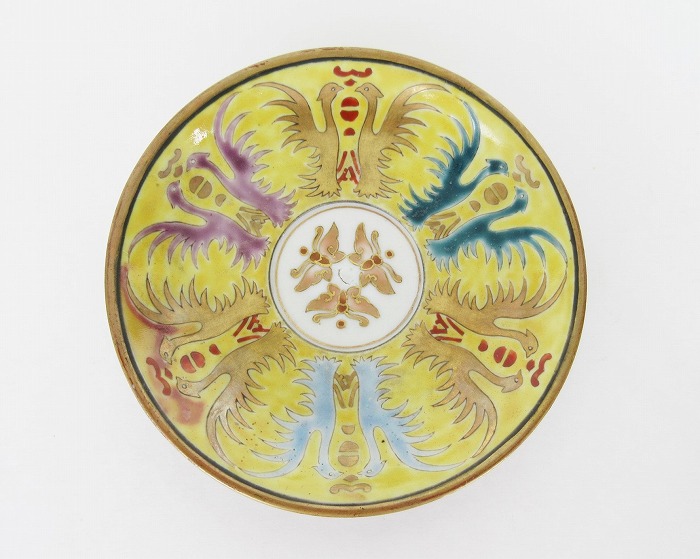 A painting factory Abe Oumi Kiln (阿部碧海窯) run by Abe Oumi (1841-1910 阿部碧海) requested to be painted by Matsumoto Sahei (松本佐平or佐瓶). Probably, this work was a saucer for demitasse cup, but even saucer is excellent in design with 6 pairs of phoenix in bright five colors and gold, drawing a pattern on the back in five colors and gold. It was a novel work in 10s of the Meiji period. 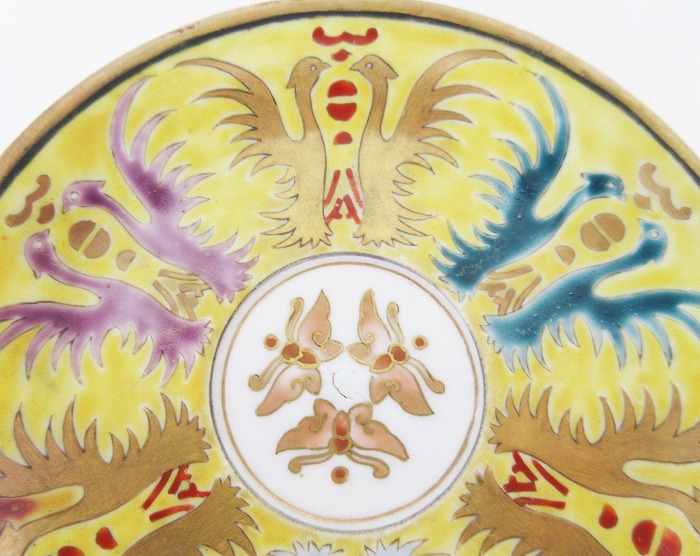 On the yellow base, a pair of phoenix facing each other are drawn in green, blue, and purple, and three pairs in gold. And the pattern of red and gold is sandwiched between the phoenix and it is colored with the traditional kutani five colors as a whole, but the color tone is like Meiji kutani with the addition of gold. Perhaps when picking up cup, butterflies with spread wings could be seen. That would be an interesting taste. 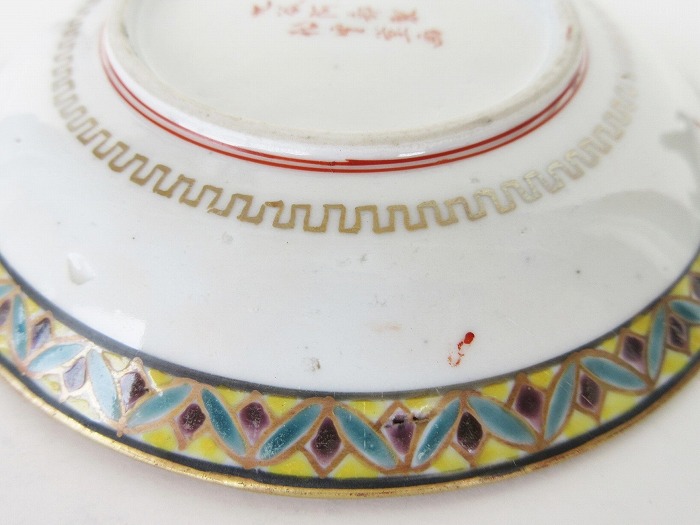 A strip-shaped pattern is drawn with a width of about 1 cm, using green, purple, yellow, and blue along the rim of the back side, and two red lines are circulated around the foot. The connected uneven patterns are also drawn in gold. It is very elaborately decorated. 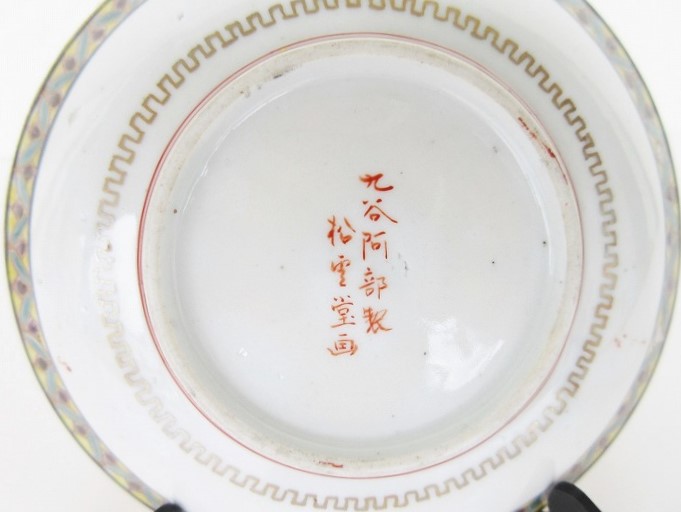 The back name is written as “ｍade by Abe of kutani / ｐainted by Shoun-do”. Matsumoto Sahei received “go” (store name号) of “Shoun” from a Japanese painter and his teacher Tokuda Kansho of Kanazawa in 1878 and after that used it as the store name. Since the Abe Oumi kiln was closed in 1880, probably this work was produced between 1878 and 1880 by Abe’s asking Matsumoto Sahei to create it.

explanation about the producer

Abe Oumi Kiln was opened in 1869 by Abe Oumi who started up to give jobs to old samurais at the end of the Edo period. He built five painting kilns and painting factory in his own mansion in Kanazawa, but they were closed in 1880.

This painting factory opened branches of sales in Nagasaki and Kobe, and expanded its sales channels with the cooperation of pottery merchant Ennaka Magobei (円中孫平). The main products were exports such as cups and saucers, food plates and confectionery plates. It is said that the products exhibited at the Vienna World’s Fair in 1873 gained fame and therefore many business partners. However, this kiln was involved in trading troubles and had to be closed in 1880. The painting kiln and factory were inherited by a chief of this factory Utsumi Kichizo.

explanation about the painter

His early style of painting was to draw people in detail, and he painted them with red, brown, black and dark red, and added gold. This is said to be the beginning of aka-kutani by Sahei, and this style of painting received high praise overseas, and Sahei’s aka-kutani became an important export product.

In 1885, he completed the technique of two times baking. He overpainted with red and black glaze and baked it once, and after decorated it with gold, he baked again. He cut off the base into several panels and drew flowers, birds and mountain water in them. It is said that its precision was described as “as if the embroidery of brocade thread on the fabric”. In this way, Matsumoto received high praise as a master craftsman in both aka-kutani and ao-kutani, but around 1893, he established “Shoun-do style” that fused the two styles. It became the most praised style.