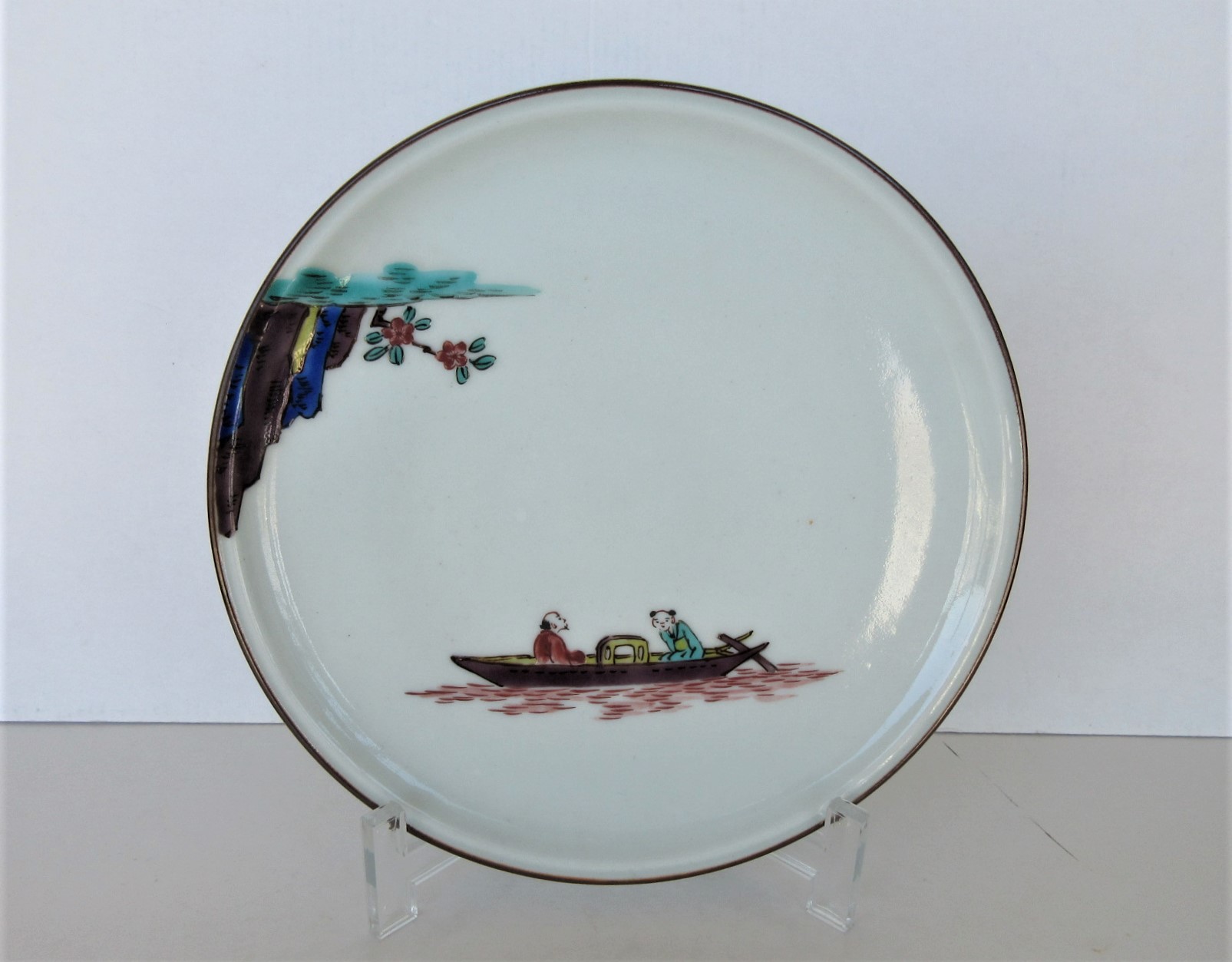 The wide white blank is likened to the water surface and the sky, as adding a little, with a small boat carrying people on the water surface and the trees and flowers overhanging in the sky. They are drawn in kutani gosai (traditional five colors inherited from ko-kutani). This composition that incorporates a wide white blank seems to imitate ko-kutani, and when looking this work, it is believed that Tokuda Yasokichi loved ko-kutani from the bottom of his heart. 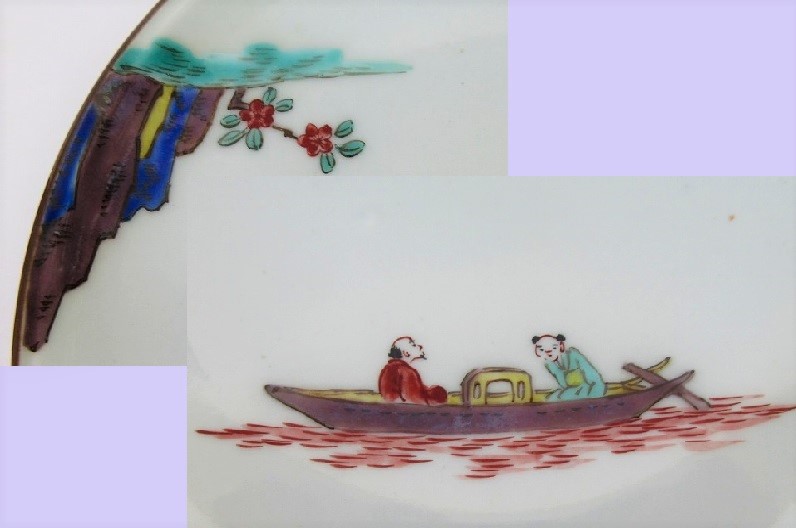 It is no exaggeration to say that Yasokichi took his life to restore the gosai of ko-kutani which burned into yang Yasokichi’s eyes for the first time. He devoted himself to the study of the gosai, finally it was beautifully reproduced them. Rarely, he used a lot of red on this plate, but this red is complemented by ripples on the wide blank. 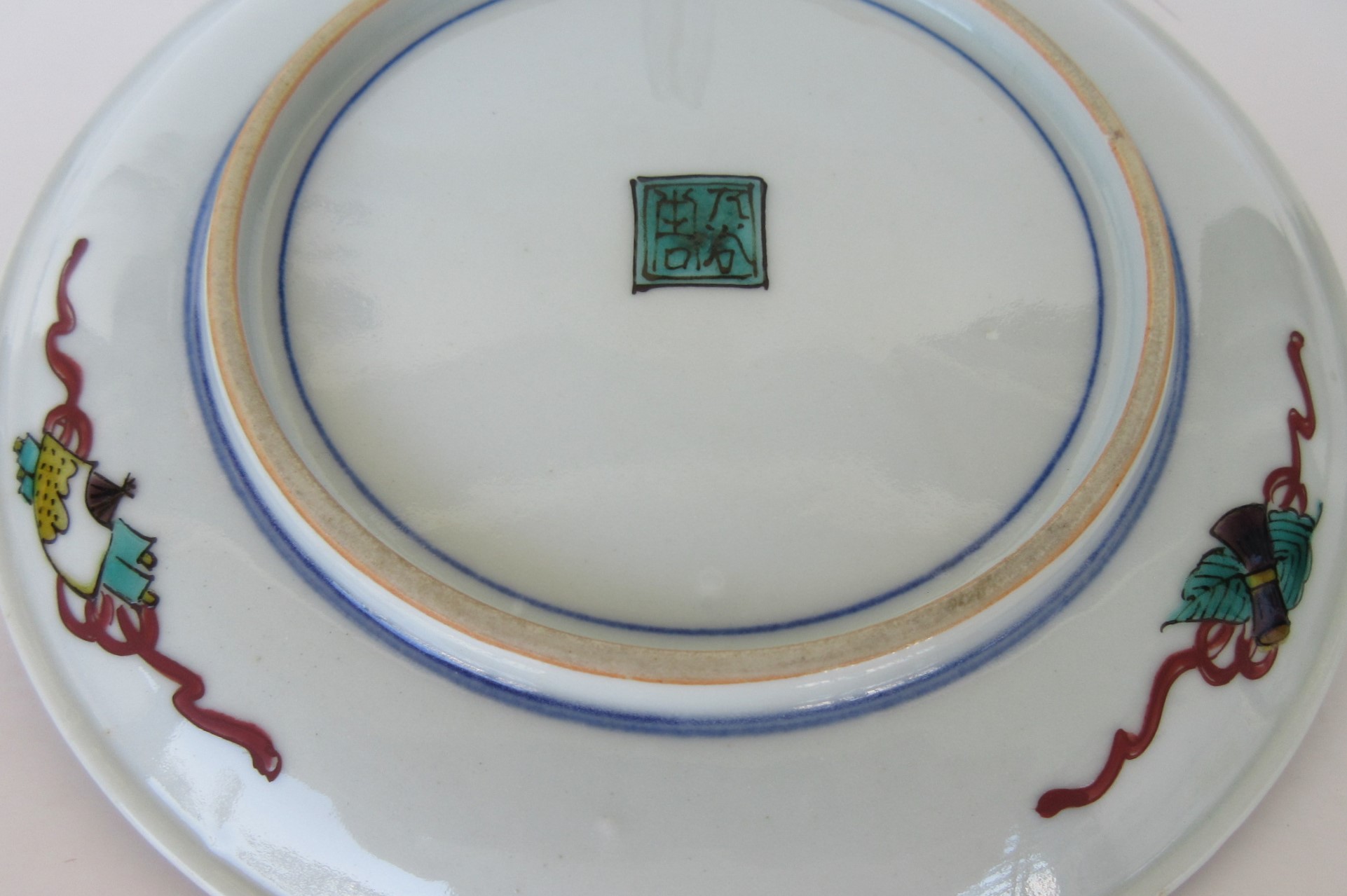 On the other hand, the back name is written as “kutani / Yasokichi”, which is filled from above in green in the foot, and the treasures patterns are lined up on the edge. This composition imitates the large bowls of ko-kutani. 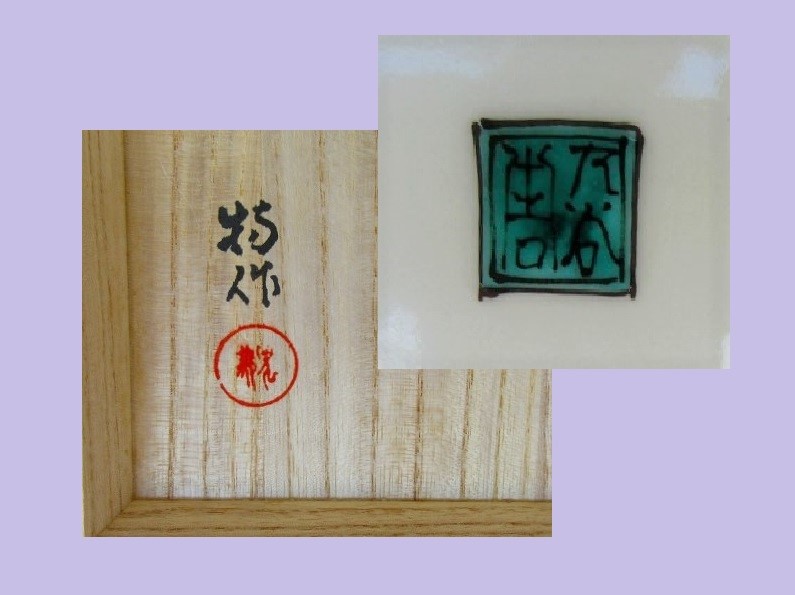 The back name “kutani / Yasokichi” is colored in green, and the stamp “Kibutsu” (鬼仏) is on the back of the box. Each has its own inside story. The first Yasokichi was surprised that after he created the work with a character “fuku” (福) in the square (often seen in ko-kutani), people mistook his works as the genuine ko-kutani, then he changed to this back name “kutani / Yasokichi”.

In 1887, when he was 14 years old, he helped his brother, Niki Kisuke who was a disciple of Matsumoto Sahei and the factory chief at the Kutani Porcelain Painting Division of Labor, which was established by Matsumoto Sahei with Nōtomi Kaijiro. Yasokichi also received guidance from Araki Tanrei (a Japanese-style painter of Kano school), who came from Tokyo to teach porcelain painting.

In 1890, at the age of 17, he entered into Matsumoto Sahei factory to study painting, and soon was strongly attracted to works of “ao-kutani” (cold-colored kutani) such as ko-kutani and “Yoshida-ya” (吉田屋).

In 1893, he passed the graduation test of the apprenticeship examination for porcelain painter and became independent on the occasion of getting a qualification as a porcelain painter. Thus, he was able to set his own goal of reproducing the style of ko-kutani and Yoshida-ya. In addition, he learned about the body and glaze, continued to study the coloring technique of colored glaze, finally reached the goal.